We like to keep it dressy-casual around here and not bog you down with too many posts. It’s just not sexy. One customer eagerly awaits our rare updates and described them as chapters of a Southern Gothic tale. So let’s get to it.

Whether we met you at a craft show or in our (relatively) new shop in Virginia, you know the saga. Brian is deployed in the Pacific while I’m starring in my own home-alone movie.

Brian and his fellow squids spent many long weeks riding out the heavy summer tempests of the Pacific. Around here, we call ’em hurricanes. Over there, typhoons. Yes, there was ship-wide seasickness, and yes, there were patches on the butts of all those poor guys. And by guys, I mean that it is an all-male ship.

They went all over the Asian Pacific Rim. He has now literally been around the world. Back in Japan, he climbed Mt Fuji in July! When he got off the train, it was 65ºF, and at the top was freezing with hail. Brian: “About 0530 in the morning – great view! The clouds, yep I will end up climbing past them! Over the alps is Edo city or Tokyo. Fujiyama is the town below. Good morning Japan!” 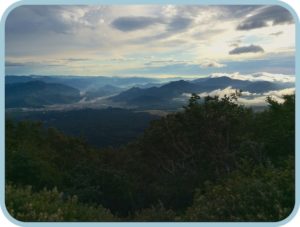 But enough about Japan. Let’s get to why you’re really here. I’ve been working out the details of new exciting products for you, some of which have been in the design pipeline for years

Vintage Lights candles are hand-poured into upcycled winebottles from our favorite Virginia wineries. The bottles are smoothly cut and finely polished by a local artisan whose work as a jeweler, metalworker and gunsmith spans several decades. Jim uses a particular process. Each bottle is cut with a diamond blade, then polished on the top edge, then the outer bevel, then the inner bevel. 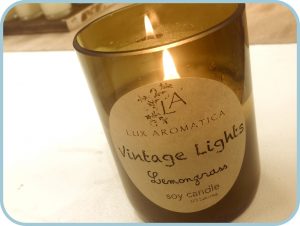 This little street urchin scooted under the car at the shop one early Fall morning. So now we have a new furry kid. Everyone, say hi to Zoe. Who could say no to this little winky face? Her first act of initiation into casa Bertolino was a bath. Zoe became our first little furry customer to to be cleansed with our brand new pet soap bar: Muddy Paws!